This is the fourth part of Tim Podesta’s blog series for the Major Projects Knowledge Hub on the subject of Benchmarking. Last week Tim gave his second of three professional examples – the Benchmarking of Major Gas Pipelines.

“For my third and final professional example, I am using the Infrastructure and Projects Authority guidance document Benchmarking – Best Practices. I was privileged to be asked to provide a ‘critical friend’ review of the document before it was issued in March of 2019.  The document describes Benchmarking as the process of improving cost and performance against similar projects.

Benefits of Benchmarking by Project Stage.  The IPA document states that benchmarking is useful at three key project stages.

There are five C’s I have highlighted in this summary; policy creation, conversations; challenge; confidence and continuous improvement which cover the range of benefits that benchmarking provides

Infrastructure Benchmarking Process – The document provides guidance on the detailed process for the effective use of benchmarking; particularly in the matter for major infrastructure projects – rail and road – although I would argue that it could be applied to other types of project as well.  At the core of the document there are seven steps to using effective benchmarking. To help explain the process I have developed an an acronym OCTAVIA – it is a Latin name  – and means eighth-born baby.

Step 1: Confirm the project Objectives and set the metrics – get clarity on the basis for benchmarking

Step 2: Break the project into major Components for benchmarking –  choose the benchmarks wisely

Step 3: Develop Templates for data gathering – create a common language and a forum of expertise

Step 4: Scope sources and gather data – a critical success factor is the Acquisition of data

Step 5: Validate and re-base the data – a further critical success factor is the quality of data

Step 6: Produce and test the benchmark figure – use Images and visual presentation

Step 7: Review and repeat, if necessary, before using data for benchmarking – Assess impact

In support of the process the IPA have created a Benchmarking Team to support the Transforming Infrastructure Performance (TIP) programme.  The Benchmarking guide is also aligned to the TIES – Transport Infrastructure Efficiency Strategy – a Department for Transport (DfT) sponsored activity involving Transport for London (Tfl), Traffic England, High Speed 2 (HS2), Network Rail and Crossrail. Members of TIES have already worked together to produce a benchmarking forum for tunnelling which an excellent example of the benchmarking guidance in action.

Tunnel example – cost – This chart is a worked example produced by the benchmarking team at the IPA working with a forum of tunnellers representing a  number of organisations; Crossrail; High Speed 2; Heathrow; Network Rail, Transport for London, Highways England; Thames Tideway Tunnel; National Grid and Scottish Water,  The study was based on Tunnelling data across a range of infrastructure types.  Of the 25 major tunnelling projects identified which have been recently completed in the UK, valid data points were collected for 16 of them. 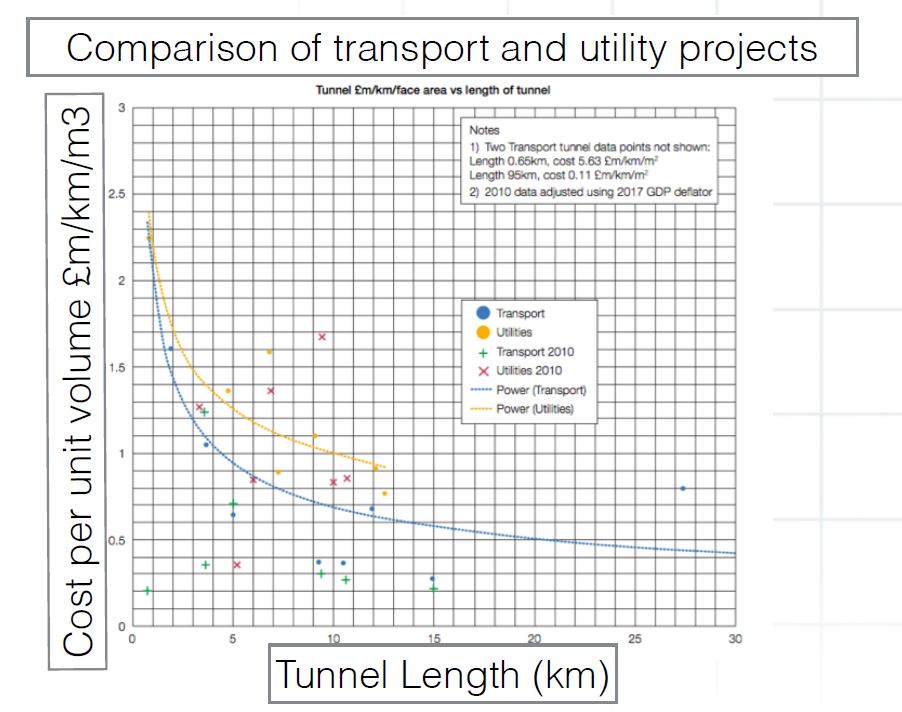 The principal drivers of cost across both groups are, perhaps unsurprisingly, length and diameter with some useful correlation of data points to form useful trend lines on the chart.  This gives the data for either a benchmark against the trend or can help identity specific projects to benchmark against.

Tunnel example – schedule  The second useful chart shows schedule and the assessment of tunnel performance as a production rate – metre/week. Once again this gives either a benchmark against the trend or can help identify specific projects to benchmark against. 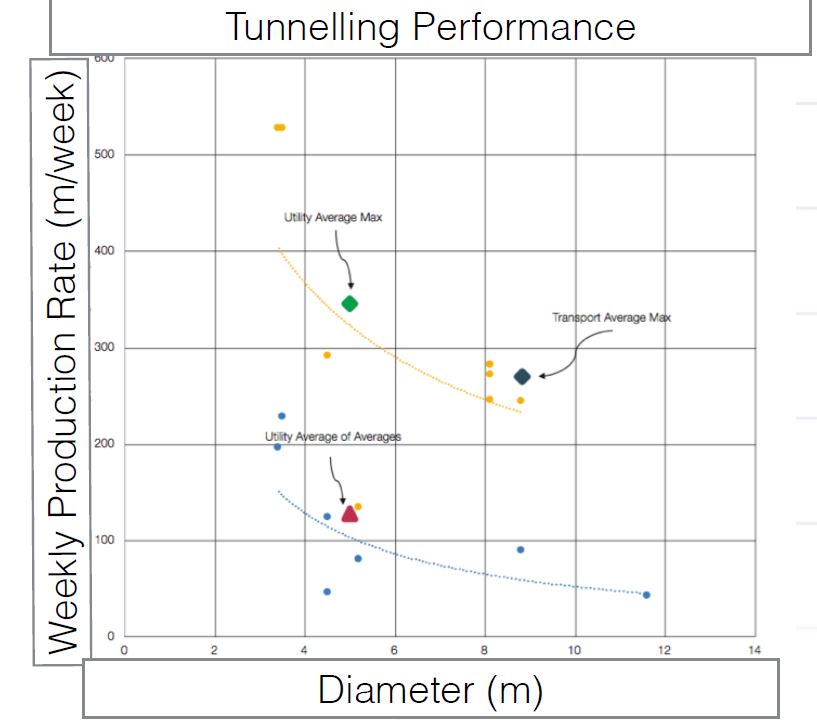 There are two lenses available for benchmarking here– internal and external.

However, my experience of a major oil and gas company, means that there can also be internal silos to deal with – we had upstream, downstream, petrochemicals and alternative energy with internal boundaries to deal with – primarily the issue of trust and different approaches – so benchmarking certainly facilitated sharing and learning.  This is a similar situation across government but with a shared benchmarking mindset it should be possible to overcome differences across government agencies – Tfl, Traffic England, HS2, Network Rail, Crossrail all involved in the TIES effort.

I believe passionately that using a  benchmark gives an invaluable external perspective ; can remove ‘tunnel vision’ and prevent  ‘groupthink’ .  as a measure a benchmark provides a discussion point, a reasonable target and a fair comparison for a project.

My call for action is to use data and benchmark to help achieving professional and personal goals. Major Gas Pipeline Benchmarks    My second professional example of benchmarking in for major oil and gas pipelines – an example is shown in the picture.  Specifically pipelines from Azerbaijan to Europe  –  I was involved in facilitating a series of front end planning workshops; advising on project best practices and investment analysis in support of the Finance Memorandum being presented for FID.

I am sure you will have your own professional examples of project benchmarks, please share any that you think would be of interest to this community.”

Read Tim’s first blog post in the series: The Art and Science of Benchmarking

I am passionate about the art and science of Benchmarking; particularly in the matter of Projects and Project Management.

I celebrated 35 years with BP and completed my time with the company as an engineer, commercial manager and programme director in 2016;  I am now an independent consultant working on a portfolio of assignments with a focus on professional development – of myself and others.  My natural areas of subject matter expertise are Benchmarking, Investment Analysis and Front End Planning for Projects based on my extensive industry experience which I continue to develop.