Blame is powerful. One act of blame destroys years of building trust, teams, and morale. We need to eliminate blame, but that requires a level of leadership and accountability that is difficult to find in politics, corporate executives, the media, and many of our co-workers. Accountability and blame go hand in hand—you are not accountable if you build a culture of blame and if you eliminate blame people have to be accountable. For that reason, in organizations that focus on blame, it is hard to find people who are accountable. Unfortunately, people often conflate accountability with who they are going to blame. Daily, we hear this confusion from newscasters, elected officials, and corporate executives. Our litigious society makes affixing blame more important than solving problems. Further, it clouds how we look at problems and their seriousness. Litigation may be a convenient mask to show stockholders and constituents that “leaders” are looking to save some capital, but the time required, the degradation of trust, and distraction from other duties makes it a poor investment. As lawyers battle, the core issues causing problems are neglected and organizations do not learn from the experience.

Blame in the Headlines

The master of learning organizations, Peter Senge, considers blame the second of the seven organizational learning disabilities. As blame is almost human nature, it is paramount that leaders relentlessly focus on root causes and not affixing blame.

Understanding and changing the culture is the only way to combat blame-focused, accountability-deficient organizations. Take a sampling of any number of corporate scandals over the last few of decades. For example, the troubles of British Petroleum, Enron, AIG, the US savings and loan scandal of the 1980s, and, more recently, Wells Fargo. You can blame Tony Hayward, Kenneth Lay, Hank Greenberg, Charles Keating, or John Stumpf, but hundreds of people had a hand in carrying out their deeds. Yes, some of these famous names broke laws and should be punished, but many others are culpable. In fact, upward of thousands of others were complicit. Many of whom profited (never complaining about the too-good-to-be-true-earnings) were the first demanding revenge in the form of one or two people being prosecuted when they lost a sizable amount of their savings.

In the case of Wells Fargo, the most recent example in this list, it is still struggling to deal with their problem appropriately. Around 2008 its executives established sales incentives with a lucrative bonus structure. Everyone from the salesperson, who would fraudulently create the new accounts, to its CEO reaped monetary rewards. The structure created little desire for internal controls. Thousands of people at Wells Fargo created millions of new accounts for existing customers, charged them the associated fees (without the customer’s knowledge), and got bonuses based on those sales. Whistleblowers were terminated. Simply firing John Stumpf, the CEO during this time, would not have addressed the problem. Theoretically, firing over five-thousand unethical employees who bought into the crooked culture along with bringing in new senior executives will bring about a new ethical operation. There is change happening inside Wells Fargo, however, only last month the new CEO, Timothy Sloane, announced his resignation. In his resignation statement, he said, “It has become apparent to me that our ability to successfully move Wells Fargo forward from here will benefit from a new CEO and fresh perspectives.” However, he is not hurting. Even though the company created 3.5 million unauthorized accounts, he took home a tidy $2 million bonus for 2018. Not something congruent with the traits of being empathetic or humble.

Blame reaches beyond its immediate effect on people. For any organization to sustain success, it must be innovative. Innovation is risky and leads to many interim failures. When people feel they are going to be blamed for failure, that culture stifles innovation and, hence, success. If you cannot tolerate failure, new ideas will never see the light of day. This is nothing new. Go back to the days of In Search of Excellence where Tom Peters’ research shows,

“A special attribute of the success-oriented, positive, and innovating environment is a substantial tolerance for failure.”

If we want innovative organizations, blame needs to be eliminated and everyone must tolerate failure.

Blame and the Three Ds

Blame does nothing but levy the three Ds on employees—disincentivize, demoralize, and defeat. If there is any fear of blame, people stop making decisions, innovation evaporates, ideas remain cloaked in secrecy, and solutions go untried. Blame single-handedly destroys any attempts at open dialog and substantive discussion.

If there is a problem with a decision or direction, it has to be thought of as a learning experience, and people must learn and move on. You can search out a plethora of references from hundreds of executives on how blame is destructive and how failure shows you are pushing the envelope.

Charles Knight, CEO of Emerson Electric Company from 1973 to 2000 said,

“You need the ability to fail. You cannot innovate unless you are willing to accept some mistakes.”

In practice, though, eliminating blame remains one of the most difficult concepts to grasp.

Where Does Blame Go?

I taught a workshop on leadership in February this year and one of the attendees was obviously challenged with the no-blame concept. He could only see chaos. He felt that without blame you could not hold others accountable. He was solidly entrenched in Frederick Taylor’s Theory X—employees dislike work, have little ambition, and are unwilling to take responsibility. The explanation that leaders need to work with people to see their mistakes, be accountable for errors, and learn from those failures did not sit well with him. He saw the world as simple black and white issues. It was easy to see the pain in his face when he figured out that the work of no blame laid at the feet of the leader—his role. His challenge gets the heart of the problem—blame is the easy way of handling a problem. However, in the long-run, blame costs companies dearly as they become less innovative and lose their most valuable resource—their people.

Read Todd’s first post in this series on leadership strategies

Read Todd’s fourth post on getting people to talk

Read Todd’s final post on listening as a leader 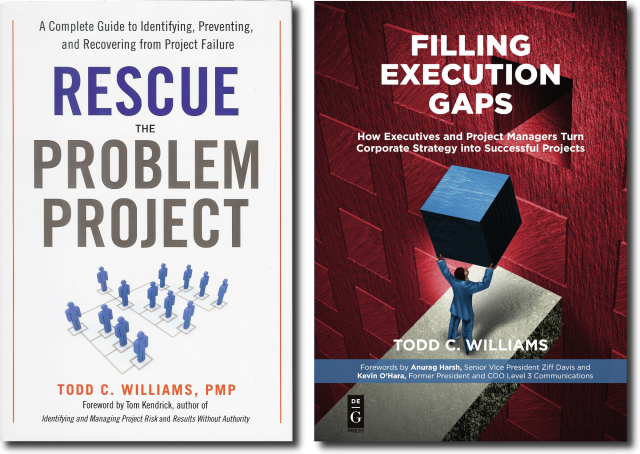 Learn more about avoiding project failure and filling the gaps that cause failures in your organization. Todd C. Williams has devoted his career to understanding and filling those gaps.

As the name implies, Rescue the Problem Project: A Complete Guide to Identifying, Preventing, and Recovering from Project Failure, an Amazon #1 bestseller, focuses on project actions.

Todd captures the reality and essence of what it takes to deliver strategy. By sharing thought provoking stories and examples, Todd provides helpful tools and approaches to navigate the difficult yet rewarding work of transforming strategy into results. A must read for anyone who works in the strategy space.