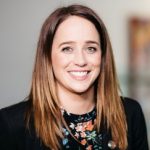 The 4LM programme is one of the most complex signalling upgrades in the world, and will deliver a new modern train control system for the District, Circle, Metropolitan and Hammersmith & City lines. This system will allow more trains to run more frequently on these lines to help support London's growing population, which is expected to increase by 1.4 million people by 2030.

Dee studied Electrical and Electronic Engineering at Queens University Belfast, graduating in 2004, and in 2015 completed MSc in Engineering Management at Brunel University London. Dee joined London Underground in 2006 as a graduate engineer, and gained some valuable experience in Asset Management prior to joining the Capital Programmes Directorate in 2010.