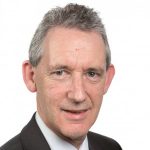 Bill has over 30 year’s programme and project management experience across capital investment to organisational change,
Bill joined Turner & Townsend in 2010 as Head of Programme and Project Management for Turner & Townsend Infrastructure (UK). During this period Bill he also led a 100+ project support team providing an integrated project controls, commercial and contract management service to Heathrow Airport Limited on the £2.5bn Heathrow Terminal 2 construction project.
From 2012 to 2018 Bill was Managing Director of Turner & Townsend’s Advisory businesses. In May 2018 he moved into the role of Head of Industry Strategy to coordinate interfaces with Government and key Industry bodies.
Bill has been actively involved in the implementation of cross industry improvements in the UK construction sector as: Chair of the Infrastructure Data Group, a member of the Infrastructure Standards Group and member of Infrastructure Steering Committee. He also led editorial input to the ‘Infrastructure Project Initiation Routemap’, which was published by HM Treasury in July 2014, and updated in 2016.
Bill is a Visiting Lecturer in Strategic Programme Management at Imperial College London and in Corporate Governance at University College London.
Fellow of the Institution of Civil Engineers, and Association for Project Management